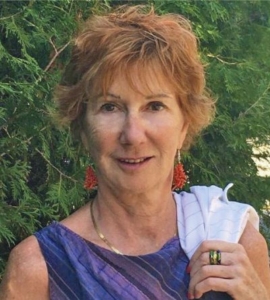 Coming from a family where art works were numerous, hanging on the walls of both the family home and that of the grandparents, Hélène DeSerres was exposed to “beauty” from a very early age. As a child, she remembers loving playing with pastels; the animal world already fascinated her, birds being her favorite subjects. It was light years away from knowing that one day, characters from the animal world were to populate her imagination and mark her creativity.

As an adult, she again picked up the pencil by enrolling in the  Arts Education program offered by Concordia University in Montreal, at that time called Sir George Williams University. Then  in Québec city, she discored the studio classes given by Albert Rousseau, an artist who would impress her with the dizzying speed of his execution. Later it was soapstone, a material that took precedence over painting for a while. From that moment, a material and its multiple applications would be present in Hélène’s art, whether on canvas or in 3D.

Those were the days of “back to the land” and after an extended stay on the farm where she raised her two children, she settled once again in Montréal. In 1980 she enrolled in a watercolor course at the Visual Arts Center. Meeting Rousseau had marked her: she wanted to discover his secrets. Another important moment in her career was time spent with André Turpin. He offered to teach her clay sculpture. She then discovered Ming Ma and was fascinated by the watercolors inspired by the techniques of Chinese painting. In the winter of 1993, she made three life-size sculptures in resin and fiberglass. She joined theCercle des Artistes-peintres de Québec(The Circle of Artist-Painters of Quebec) and was accepted there in the fall of 1994. In 1995 she learned to work with the lost-wax process at the Instituto Allende in San Miguel de Allende, Mexico. It’s love at first sight: she cast her first bronzes.

Hélène DeSerres plays with forms, no matter how challenging the material might be. She likes challenging ideas and creates in an organic way. Her eclectic journeys account for a lot: from watercolors to clay, from lost-wax to bronze, from pencil to acrylic, all these materials serve as her backdrop and it is with lightness that she transforms them into works which she describes as intuitive. Hélène does not like to put words to her works and even less to talk about her method. In her studio, she says she has “experiences” and lets her subconscious work. Hélène DeSerres is deeply concerned about climate change and all the upheaval we are experiencing today. Her works, evoking nature, even if executed with all the suppleness of her art,reflect a commitment and unambiguous dialogue.

Art is my oxygen

An avid photographer since early childhood, fiercely passionate for adventure and travel, I am fascinated with exploring the many diverse cultures and the intense beauty of this planet.

I love to capture vivid landscapes, authentic, down to earth people and unsuspecting organic elements.

Then back in my studio, using various media, I love to create a new and mysterious universe using transparencies, textures and vibrant colors evoking both the surrealism of the images and the mysteries of nature.

After completing her classical studies and obtaining a Bachelor Degree in Political Science at Loyola University, she later enrols in the Plastic Arts program at Sir George Williams University, now referred to as Concordia.

While on a two year stay in Quebec City, she follows creative workshops at the Moulin des Arts with the famous Albert Rousseau.During this stimulating period, she discovers sculpture and copper enamel.

Upon her return to Montreal and fascinated by the Chinese watercolourist Ming Ma, Hélène is initiated into the ethereal world of water color. Her apprenticeship is complete after studying with the sculptor, Andre Turpin.

At the Allende Institute in Mexico, she experiments with lost wax technique and creates her first bronze sculptures. In Montreal, she further applies these techniques to her unique jewelry creations.